Recently I have had cause for complaint with our Samsung LE40M86BD LCD Television.  It had been working just fine, and then all of a sudden it developed a power-cycling problem.  The symptom is as follows:

I decided to take a look, and that’s what this blog post is about!

I took the back off, and it never ceases to amaze me how little there is inside modern TVs.  They are for more complicated than older TVs of course, but all the technology is packed into densely populated embedded systems.

Straight away I noticed something suspicious on the Power Supply board; nasty looking electrolytic capacitors! Let’s check them out:

The Power Supply Board 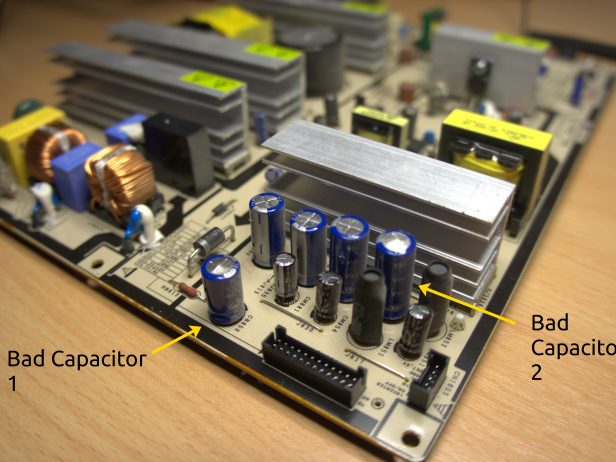 Two of these capacitors, highlighted in the image above, are showing the classic signs of dielectric degradation.  The top of the cans are bulging at the seams.
Sometimes this type of capacitor will also leak electrolyte, which can be very bad news indeed.  In this case, it’s just the classic bulging.

At this point I decided to replace all the capacitors in the local area, as sometimes an electrolytic capacitor can be bad without displaying any obvious physical signs and they all will have been subjected to the heat pumped out by the nearby components.

After this I was quite hopeful of a quick and easy repair.  But my hopes were dashed when I discovered that the TV was still power-cycling after a few minutes of use.

So, what to do? Well, I decided to be a bit more scientific about it from now on.  I got my ‘scope out and checked each of the power supply rails generated by the PSU board.  I discovered two things:

So… the original fault was not on the Power Supply board then.

As a point of interest, I discovered an input control pin on the Power Supply called “ON/OFF”, which is driven from the main system.  I decided to take a capture of it and I discovered that my estimate of ~30 seconds power-cycling was almost spot on: 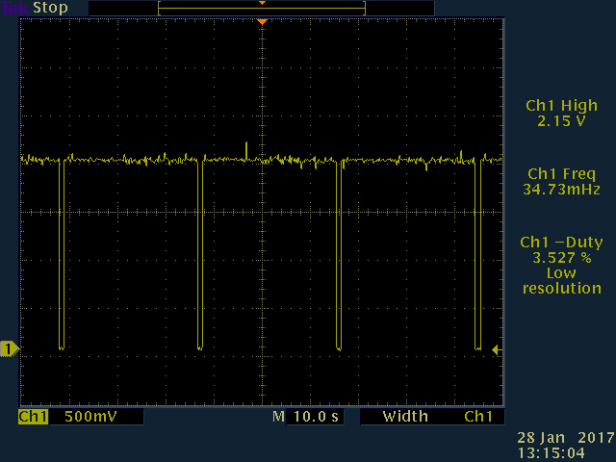 You can see here that the TV stays on for 28.7 seconds, then switches OFF, and immediately back ON.  The cycle repeats with exactly the same period over and over again.

So, this got me thinking.  The fault is surely on the main circuit board, as this appears to be deliberately instructing the Power Supply to turn OFF at regular intervals.  Let’s take a look!

So, at first glance, there isn’t really much for me to get my teeth into here.  There was next to no information about this board on the internet.  I found a schematic, but it was more block-diagram level than anything else.

The photo above shows the board with the screening can removed, revealing the microprocessor underneath.  I took the screening can off because I noticed a bunch of SMD electrolytic capacitors and I wondered if they had been getting a little hot under the collar over the years.

An inspection of all the SMD electrolytic capacitors didn’t reveal anything suspicious; no bulging or evidence of leakage at all.
However… that isn’t particularly definitive.  Let’s see what happens if I try to measure the ESR (Equivalent Series Resistance) on some of these capacitors!

So, the ‘scope capture above shows the voltage drop across C1104 when stimulated with a 100kHz square wave at 1V peak-peak (50Ω output impedance).  C1104 is a 100uF capacitor, so the voltage drop at this frequency on a healthy capacitor should be close to zero.  What do we see instead? 286mV!

If you do the math, you’ll find that this comes out as approximately 5.5Ω ESR.  A horrendously bad capacitor!

At this point I went all around the board measuring ESR on the SMD capacitors.  I was able to measure the majority of them in-circuit, and I found a whole bunch of bad caps.  I replaced them all.

After this, the TV is finally working properly.  The fault has not re-appeared in over a week.

The total components replaced are as follows:

Another perfectly good piece of kit saved from the scrap heap.